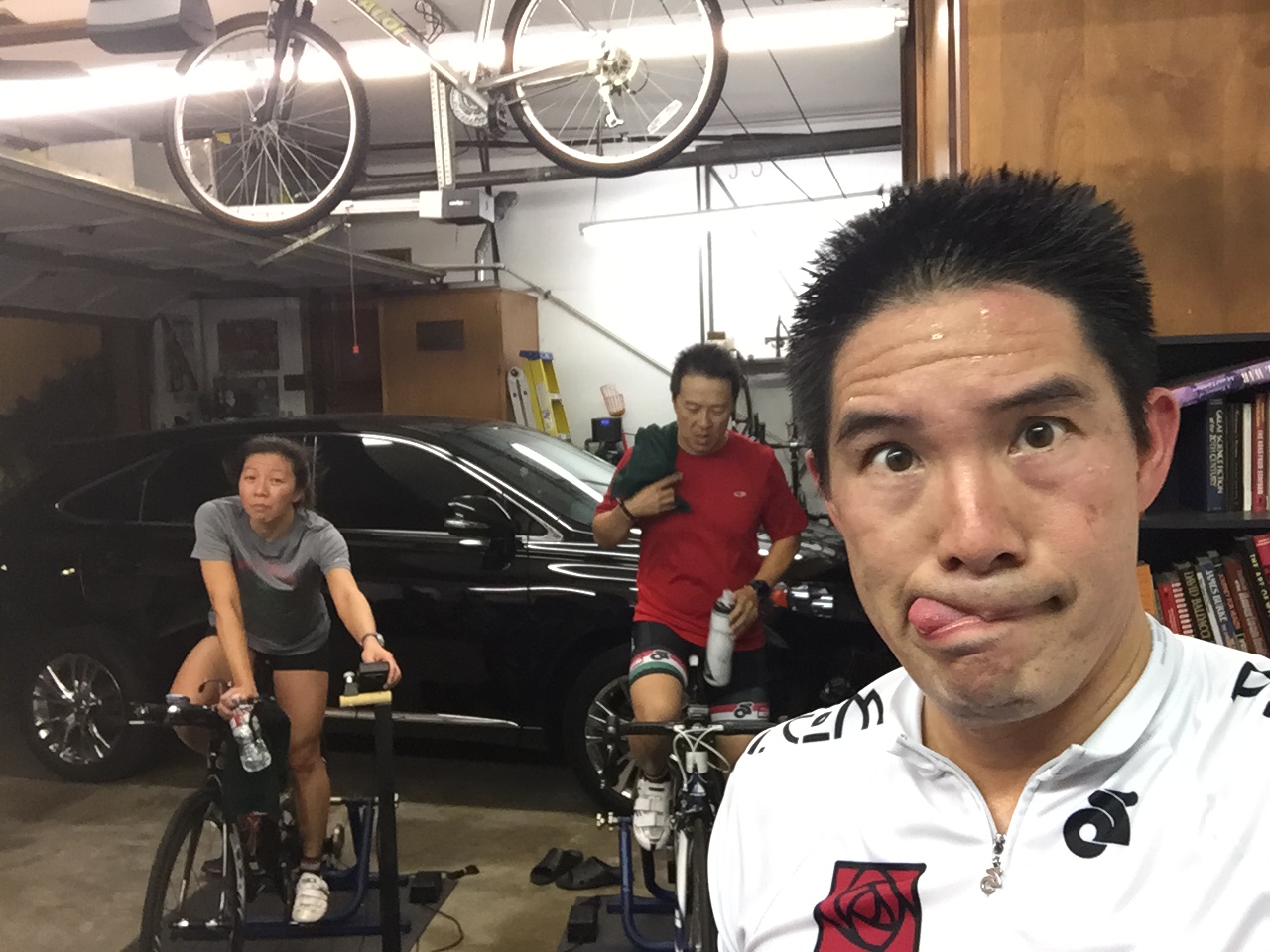 This was a killer night. It was all climbing. Although there was a descent, everybody was powering down just as hard climbing up. The main big hill averaged about 10% with stuff up to 18% mixed in. Yikes. Gunners had me, Bill, Alvin and Amy. I hung in there during the first climb, but started to cramp on the descent. Fell back and didn’t recover much. 7th place for me this week. Bill’s ride reports are below. Quite eventful. 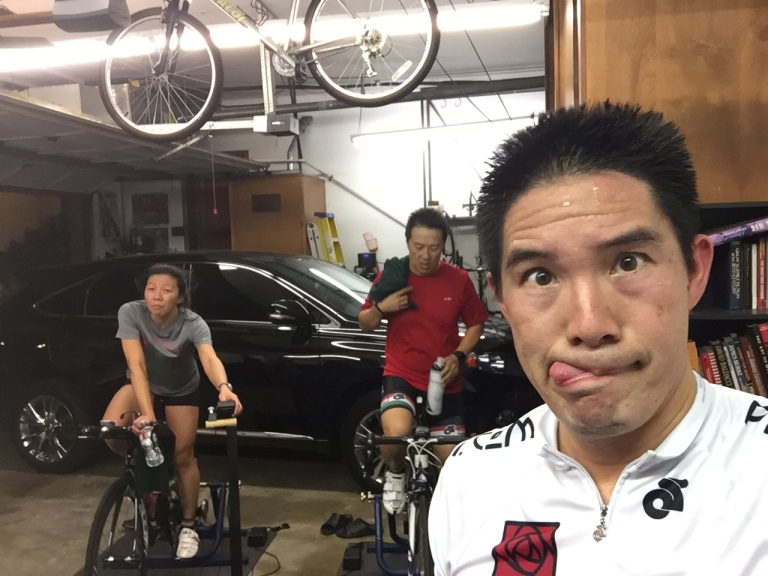 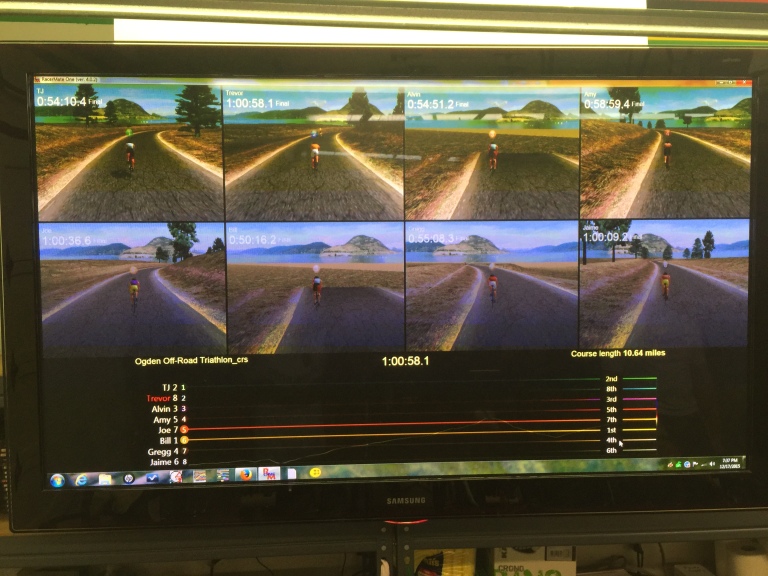 Here’s the report, which may be a bit skimpy on details, because I was BUSY tonight.  I may also have a couple of the details wrong; if I got something important wrong, please let me know.

Racing tonight, the last night before the holiday break, were Trevor, Gregg, Jaime and Tony for the Pushers and Bill, Alvin, Joe & Amy for the Gunners.  The race started out at a quick, but not killer, pace.  All riders mostly stayed together until the base of the first big climb, at which time things started to spread out.  Bill went off the front, chased by Tony.  Behind them, Alvin & Greg formed a group, with Amy, Jaime & Joe forming another group behind them, and Trevor falling off the back almost immediately.

As the climb progressed, Bill gradually put more time into Tony.  He did a good long surge going over the top, expanding his lead out to about 500 yards. Alvin and Greg topped out a few minutes later, then Amy & Jaime, followed by Joe, then Trevor.

Going down the fast descent, Bill had pushed his lead out to almost a mile when he got severe calf cramps and almost came to a stop a few times.  Tony had closed the gap down to a few hundred yards as they got onto the second climb, at which point Bill found his stride and once again pulled away.  Tony gradually got weaker as the second climb progressed, adding to Bill’s lead.  At some point along the way, Alvin was able to get a small gap on Gregg, which he was able to hold all the way up that last climb, although Gregg was able to get close at the end.  Amy was also able to gap Jaime on that climb, putting about a minute into him. Joe and Trevor were closing down on Jaime as the stage ended, crossing the line about 30 seconds and a minute behind him, respectively.

The KOM standings are as follows:

And, the individual leaderboard is as follows:

In regard to scheduling, next week is dark for the holidays.  Have a great time!  We race again the following week.  After a survey of participants, it has been decided to move the “B” race, which normally would be scheduled for 6:30pm on New Year’s Eve to 7:30pm on 12/30, immediately following the “A” race that night.

Tonight was hot, hot hot.  Riding for the Gunners were Ben, Peter, Jeff and Bryan, while riding for the Pushers were Jonathan, Tyler and Jason.  The group started out hot, hot, hot, and dropped Jason within the first half-mile.  They then formed a group of six which stayed together onto the big climb of the day.

Once on the climb, the group tried to stay together for a while, but Jeff made it away from the group and was able to open up a gap of several hundred feet on the others.  While this was occurring, Ben, Bryan, and Tyler were able to get some separation on Jonathan and Peter.  This chase group then pulled away while Peter and Jonathan stayed together for the rest of the stage.  The fact that it was a chase group did not stop the attacks, though.  Tyler did much of the animation, although Bryan and Ben had their shots.  Finally Ben, who had come down with some sort of winter bug but was riding anyway, dropped off this group after several particularly savage attacks and started to slide backward.

About halfway up the main climb, Bryan put in a surge and bridged over to Jeff.  However, even though he gapped Tyler, Tyler was able to bridge over to the lead two almost immediately, and they carried on as a group of three. As they neared the KOM point, more attacks followed and Tyler and Bryan pulled away from Jeff.  Bryan and Tyler staged a Battle Royale for the KOM points, with Tyler finally able to put enough distance on Bryan to claim the points with a long 400+ watt surge.

Over the top of the climb, the riders coursed downhill, with Bryan barely able to hold Tyler’s wheel at speeds sometimes exceeding 40 mph. Jeff followed not far behind, while Ben created the hill a minute or so back, followed by Jonathan and Peter, with Jason bringing up the rear.

The last climb was more of the same, with Tyler and Bryan exchanging blows at the front, but neither rider able to get away,  Jeff carried on, but was not able to close the gap and slid backwards very slowly.  Ben started to falter on the final climb, which allowed Jonathan and Peter to eventually catch, and almost immediately drop him.

Overall, the Gunners put about 5 1/2 minutes into the Pushers this evening, giving them a total gap of about 37 minutes.  Tyler vacuumed up the KOM points, finishing with 35, while Bryan got 21 and Jeff 11.  Tomorrow night, the “B” group goes at 6:30.  This will end the riding for a while, as we will be taking the following week off.  A rest has been earned by all!

Riding tonight were Bob, Hank, Eugene and Michael Bowdish for the Pushers and Luis, Cheryll and GT for the Gunners. The Gunners were down a man, and would be taking a two minute penalty on the night.  There were a couple of hardware issues in the first few minutes as plugs were knocked out of resistance units at a couple of stations, necessitating slowing the field while the advantages/disadvantages were sorted out.  However, all was made well.

At the start, all stayed together until the first climb, at which point Bob and Hank got away and started to work well together.  Eugene tried to stay with them for a while, but couldn’t hold their pace on the climb and eventually fell off and ended up on his own.  Behind these riders, a group of Luis, Cheryll and GT formed and also started to work together.  Michael got dropped and started riding at his own pace.

This situation stayed stable for much of the first climb, with the chase group of Cheryll, Luis & GT gradually reeling in Eugene, with GT doing most of the work of the chase group.  Once the chase group caught Eugene near the top of the hill, there were some cat and mouse games, since Eugene didn’t want to do too much work, and the other riders from the Gunners wanted him to work as much as possible.

Over the top of the first KOM, Bob led the way after pulling for much of the climb, followed by Hank.  Some time later, Luis made a bid to be next over the top of the hill, but was bested by Eugene with a strong surge.  This effort broke Eugene and Luis away from GT and Cheryll as they started the rush downhill.  However, Luis dropped his chain off the outside of his crank when he attempted to go to the big ring, and ended up getting dropped by the others which he got it squared away.  At this point, the chase group riders were all strung out, with Eugene a couple of hundred feet in front of GT, who was a few hundred feet in front of Cheryll, who was a few hundred feet in front of Luis.

By the bottom of the descent, Luis had caught Cheryll, but then dropped his chain again while trying to shift back to the small ring.  Once again he ended up off the back, and once again he set out to catch the rider in front of him.  However, this time, it was different.  Eugene and GT had gotten away from Cheryll who was riding on her own, with Luis trailing.  So this time, it was Luis and GT playing cat and mouse games, seeing who could make who do the most work.

Eventually, Luis caught Cheryll, while Bob and Hank sailed on ahead.  Bob started to tire with a mile or two to go, and Hank surged away to a solo victory.  Bob crossed the line about a minute later.  GT and Eugene made a run for the line when they arrived about 6 minutes later, with GT putting in a strong surge over the last 150 feet to take third place.  Luis and Cheryll crossed the line about a minute later, and Michael finished about 15 minutes behind them.

As a result of this night’s activity, the Pushers picked up roughly 16 minutes on the Gunners.  Bob was the big winner with KOM points, taking home 13, followed by Hank with 12.  Overall, the Gunner’s lead is now down to about 29 1/2 minutes with the “A” riders up tomorrow night. 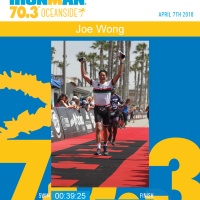