[Details, stats, splits for all PTC Participants are at the bottom of post.]

I took lots of pictures before and after the race. Maggie took pictures during the race.

What a super fun day at the park. It was a hot one though. It started warm. At sunrise, about 6:30am it was already 80F.  Bonelli Park is a reservior and the water was 75°F; which is also super warm. During the 3 loop bike ride, it just got warmer and hotter and hot. By the run, it was 95°F at the finish line. Fun post party.

A bunch of PTC guys and gals got on the podium!. Amy, Lisa, MikeK.

PTC relays got on the podium too! We took home raffles wins too!

Thanks to Lynda, Bill, Maggie, Charles, Todd, Luis, Gregg for setting up and tearing down the food, tents and trailer. I had a blast. Thanks to Dino for donating coolers of ALOE GLOE and drinks.

Swim: 33:11 (my garmin) I liked my swim. It went well. I was bumping a couple guys for most of the swim. There was some contention about 2nd half of the swim buoys. The swim was kinda of triangle, but could have been more of a rectangle. Some lifeguards were telling folks to go around an extra buoy on the way back. I went “straight” back from the far buoy. No huge gulps of lake water. The water was gross. I think even the little sips upset my system. See bike sections.

T1: I planted my flip flops by the swim out and that was nice.

Bike: 1:30 (my garmin) I focused on my power at 200W whether going up or down. This is a hilly, 3-loop course. There are 2 main hills each loop. The first is right out of transition. Then you fly down the hill along side the 57 Hwy. I had my Redshift seat post in the Up Aero position. I held onto aero on the descent and hit 40 mph. Big headwind out by the airport. Good thing I focused on Power cuz I would have been sorely upset at the speed into the headwind. Ben zoomed passed me on the crappy road section. On the second loop, the lake water wanted out of my system. While I was trying to drink down my nutrition, the lake water was trying to come back up. I pulled over and gave some dry heaves to give the lake water a chance to do its thing, but nothing. After that experience, my drinking and eating were kinda of tentative. However, in the extreme heat, I felt I had to keep drinking at a constant and good pace or I’d just pass out.

T2: simple. Grabbed a full hat for ice. Too bad there was no ice on course. Boo race dude. Grabbed cooling towel. This was to be a literal LIFE SAVER.

Run. 1:17 (my garmin) Started eating slowing and drinking a lot. It was a hard day. Stomach was still upset, then adding lots water started sloshing it around. Walked and jogged slowly. Glenn, Amy, GT, Corrina, Lisa, Janet, cheered me up, as they zoomed by. This is a hilly and hot course.

Overall, I’m happy with the race. I was proud of my swim and bike (the heaves didn’t take too much time off). The run was hot, but the cooling towel kept my mental state in check. Last year, I mentally lost when I overheated. Dark Dark thoughts last year. Not so much this year. Yay.

Post race: It was great to hang out with the club members. We cheered as the Relay Teams took the podiums. Amy, Lisa, Peter took Age Group podiums too. Awesome. 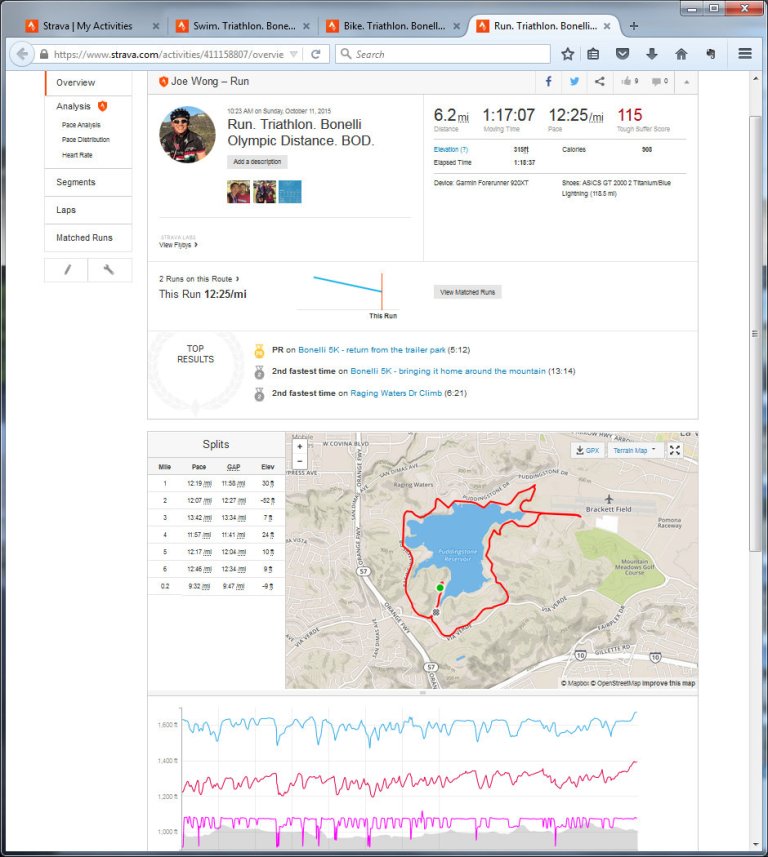 Congrats to all the PTC podium winners!

Ben, Charles, Matt, Mike, Bill podiumed in the Relays.
[Please reply/share if I missed your win.]

Thanks to Lynda, Bill, Maggie, Charles, Todd, Luis, Gregg for setting up and tearing down the food, tents and trailer. I had a blast. Thanks to Dino for donating coolers of ALOE GLOE and drinks.