I got my new bike assembled and took it to CompuTrainer for its maiden voyage. I still have a bunch of dialing in to do on it, but it rode great. I’ll post more on the bike separately. This was Week 9 of the Tour de Rock. Sprint course was mostly flat and fast. I was exceedingly happy to stay with the pack of A Group riders. I attribute a lot of it to my new bike! I got over-excited at the mid-point where there was a Sprint Point available. But, I screwed up and surged at 10.5 miles, instead of 11.5 miles. Doah! For the rest of the night, there were surges all night long. I was barely hanging on. If they strung together 2 or 3 surges on top of each other, they certainly would have dropped me. Peter and Tyler took off at the start and made up 5 minutes each and that was a major gain for their team. The final team competition is about 3 minutes apart. Next week is the final chapter and anybody’s game. So fun! 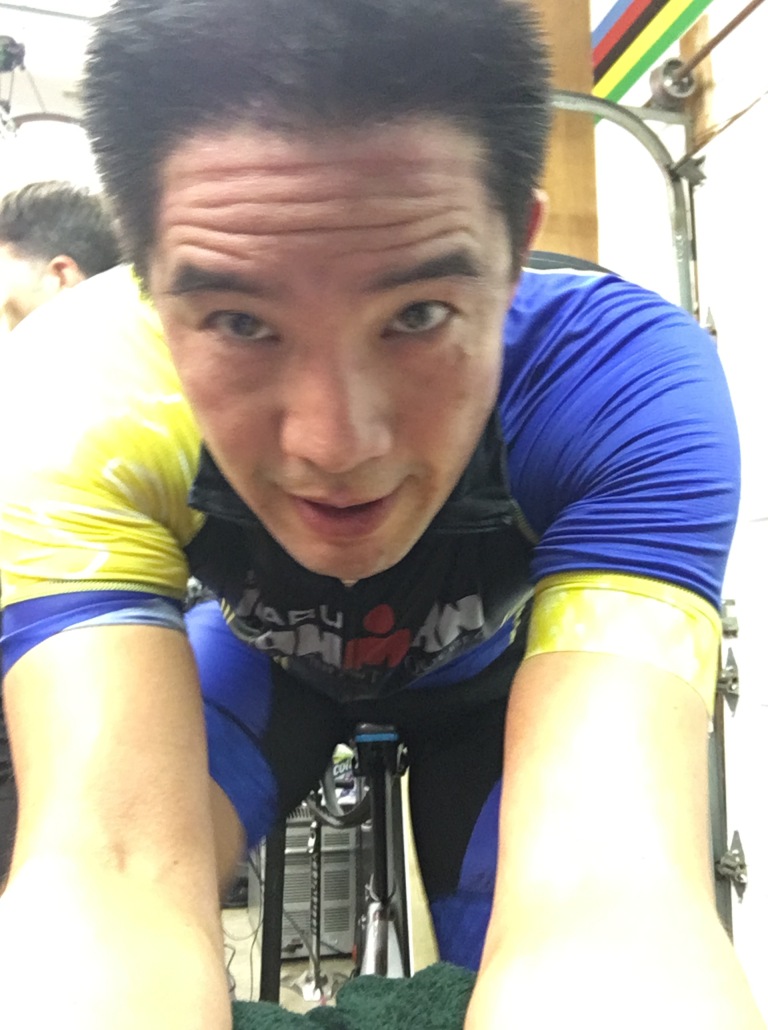 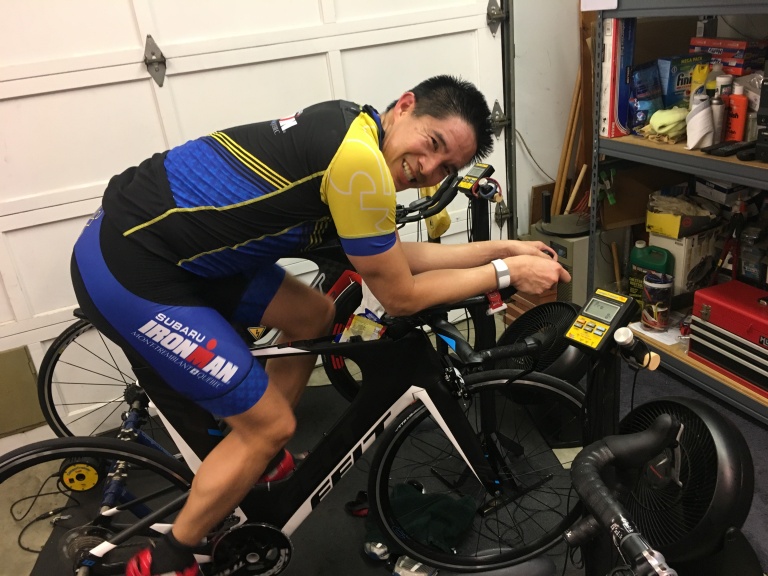 The big question tonight was, “can the Merchants make up the last few minutes on the Cannibals and pull even going into the last stage”?  They were about 6 minutes back starting tonight, and with it being a flat stage, that seemed like a tall order. Riding for the Merchants tonight were Tyler, Peter, Bob & Trevor; riding for the Cannibals were Jeff, Scott, Kirk & Joe.

The question started to get an answer at the drop of the flag.  As soon as the green light went on, Tyler and Peter went off.  None of the others seemed to have anticipated the fast start, and were caught by surprise.  Chase efforts were made, but each of the chasers were popped off in quick succession, leaving the lead pair about 130 feet up the road by the end of the first minute.

Somewhat surprisingly, since all of the Cannnibals were in the chase pack, the chasers made no real effort to get organized and see if they could either run the lead pair down, or at least keep the time loss minimal.  They seemed to be riding as individuals, all more concerned with squelching other attacks from within the group then on getting after the leaders.  This made for a nervous, but not particularly fast, chase pack, as various riders would put in short surges only to be chased immediately by the others, at which point the pace would slow.

This remained the case for a while, then at around Mile 3 we saw the first sustained effort out of the chase pack.  Scott was the first to go, putting in a long hard effort, and significantly stringing out the group.  Once he had been chased down, he recovered for a bit, and did it again, and again, and again at Miles 4.5, 5 and 5.5.  Each time, the riders got strung out farther, and the attack at Mile 5.5 even split the group briefly, until a frantic chase brought them back together.  Kirk also took a dig or two during this time, all of which kept the pace higher than it had been.

After this action had subsided for a bit, Jeff took up the cudgels, with long digs at Mile 6.8, 7.2, 8.8 and 9.4.  It became clear that the Cannibals’ strategy was to throw repeated attacks at the remaining Merchants, and see if they could drop them via “attrition”.  Even thought they were caught on the back foot a couple of times, the Merchants, esp. Trevor, responded admirably to all these attacks and kept pulling the attackers back.

Joe was the big winner of the pre-sprint, putting in a huge 500+ watt effort to take the non-points at Mile 10.5 (the intermediate sprint was at Mile 11.5).  Even so, he showed remarkable strength.  He had brought his new bike to tonight’s action, and he was covered with “new bike smell”, riding harder and faster than in the past.

In the intermediate sprint, Tyler and Peter were first through, with Tyler timing his attack well and beating Peter to the line.  Some minutes back, the pack started getting edgy at about Mile 11, with some aborted surges, all promptly covered.  Following these few short surges, Jeff came out of the pack at Mile 11.25 with a long effort and was able to hold off all the competition for the last 1/4 mile to the sprint point, taking the points for 3rd.

After the sprint, the chase group came back together within short order, and remained so virtually to the finish.  After a few miles of recovery, Scott and Jeff started back in with their co-ordinated attacks on the group, this time clearly aimed at trying to separate Trevor from the group.  Surge after surge was thrown at the group, and time after time the group responded.  Towards the end, there were a few attacks that seriously strung out the group and looked like they had a chance at success, only to be pulled back when the attacker had to back off, due to running out of gas.  They just weren’t quite strong enough to hold the attacks long enough to finally drive the others into submission off the back.

Coming to the line, Peter was able to grab the front coming to the line and hold off a late surge by Tyler to win by a nose, with both riders at 58:43. They had gradually built up a lead of well over a mile over the course of the stage, and the big question was how many minutes would that translate into.  Back in the chase group, Jeff once again went with about a 1/4 mile to go, but this time no one was able to hold his wheel, and he finished clear of the group in 1:03:26. Trevor was next, a foot or two ahead of Kirk, both at 1:03:27.  Joe and Bob were a few feet back at 1:03:28, and Scott closed out the action at 1:03:30.

So – the Merchants were able to make up roughly 10 minutes in the overall, putting their team into the lead for only the second week in the Tour, establishing a lead of about 3 1/2 minutes going into the final stage.  The individual leaderboard is:

In the sprint points, the tally now stands as follows:

We now have one stage left, and it will be a climbing stage!  Every minute will count, and all riders will need to bring their “A” game, because the team title is up for grabs in the final week.  The course will be announced after this weekend, so stay tuned!

Tonight was flat and fast.  The teams were Bryan, Allen, Gregg and Deanna for the Cannibals, and Phil, Steve, Rudy and Amy for the Merchants.

In tonight’s action, Bryan showed up a bit late and got calibrated about 10 seconds before the start.  He had a small issue after that, and dropped back around 300 feet from the pack.  Once that issue was resolved, he rode hard and managed to get back on by Mile 0.75.

The pack stayed together until the first (little) climb at Mile 2.5.  Bryan and Gregg put in a surge on that climb, and got away from the pack at Mile 2.75, but they didn’t press the advantage, and one by one, the other riders bridged back up to them by Mile 3.

From that point, the pack stayed together until the first sprint.  Gregg, Steve, Phil and Bryan all put in surges or attacks to spice up the action, but ultimately all they accomplished was to string things out for a bit before the riders all came back to gruppo compatto.

As the ride went on, Deanna started to show signs of weakness, yo-yoing at the back without actually falling off.  However, she did fall back to the point of almost being dropped a few times, only to surge back on.  Starting at Mile 11, we started to see feints in anticipation of the first sprint point.  After a few false attacks, Phil finally went hard at Mile 11.4 and held off, first, a counter-attack from Gregg, then a last-minute surge from Bryan.  The order for the first sprint was Phil, Bryan, then Gregg.

At Mile 14.25, the first real attack came, and the group split into two, with Bryan, Gregg, Phil and Amy making the front group, dropping Steve, Rudy, Deanna and Allen.  Of course, members of this second group started to put in efforts to bridge back up to the first group, and in this action, Deanna got dropped at Mile 14.7.  The others formed a group with Steve doing the hard work, and he pulled them back up to the leaders at Mile 14.9.

Almost immediately Bryan counter-attacked, and got free on his own.  Phil tried to go with him and stayed on for about 30-45 seconds, before finally falling prey to Bryan’s hard surge.  This left Phil in no-man’s-land for a while, several hundred feet ahead of the chasers, but also several hundred feet behind Bryan.

After some indecision on the part of the chasers, once again, Steve did the hard work to bring the group back up to Phil by Mile 16.  Once the group reformed, Gregg went to the front and sat up, and the others were apparently too fogged in to notice what was happening, and were content to poke along at about 3/4 pace for about a mile.

They were finally woken up, and the pace became much more active.  Bryan had taken advantage of the group brain fade to establish a big gap, while Deanna didn’t get dropped too far behind until they finally woke up.  Once this occurred, various riders took hard turns on the front, testing the others.  Steve made one hard attack which dropped Rudy & Allen at Mile 18.15, but nobody worked with him, and the dropped riders were able to get back on by Mile 18.3.  The gap up to Bryan was only growing slowly once they started to ride hard, but the gap back to Deanna was growing about twice as fast.

Bryan continued to work hard at the front, trying to put as much time as possible into the chasers.  When the group got to the second little climb of the day at Mile 22, Gregg showed some climbing legs and strung the group out nicely, but they all managed to stay within drafting distance (some barely), and it all came back together at the top of the climb.

At the end of the day, the Merchants made up about 3 1/2 minutes, leaving the overall gap at about 6 1/2 minutes pending the “A” race tomorrow.

Well done to all!