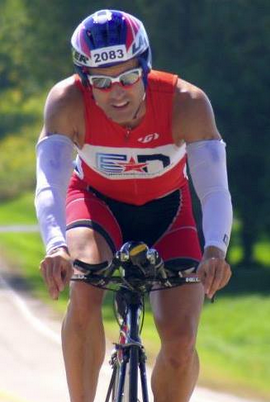 Rich is a 45 year old, triathlon coach, at Endurance Nation. His triathlon story is closely tied to Pasadena Triathlon Club.

His triathlon story started in 1999, while stationed at Camp Pendleton. He had been deployed for 4-5 years in the desert, blowing stuff up. By April 1999, he had enough time locally to enter a triathlon. As a swimmer in college and recreational runner, all he needed was a bike. During a run in San Diego, he saw a yard sale with a Trek road bike. Guy said he could trade him for an old rifle.

First triathlon was in June 1999, Olympic distance. He wore a Speedo for the whole race. During the bike, he drank a 40 oz. Camelback and got stomach cramps on the run. Rich started the run out of T2 with his helmet still on. Quite a newbie…

In 2001 spring, he raced Ironman California. At the event, local athletes asked him for training tips and coaching. He started his own coaching company Crucible Fitness. He hated day job and tried to figure out how to make it work. His day job laid him off and made the decision for him. He’s been coaching ever since.

Rich started the Pasadena Triathlon Club in 2004. He coached triathletes 1-on-1 until 2007. After which time he founded Endurance Nation (EN) 2007. EN started from 80 athletes to 700 athletes now. EN won Ironman Tri Club Championship in 2013.

“Triathlon sport humbles everyone. Everyone is open to learning new things. Everyone in the sport is welcoming. It has lot less baggage than other sports.”

Since then, Rich has finished 9-10 Ironman and a bunch of half Ironmans. By 2006, he lost interest in own personal training and racing.

He recently finished Ironman in 2011.

Lesson Learned: First company name was Crucible Fitness. The sport puts you through something difficult, in order to find transformation in your life.

Oh, and by the way, everyone else thinks you’re a badass. Not many things in modern world allow us to test ourselves physically, organizationally, just triathlon.

Solve the puzzle: Learn how to do all  three sports, how to fit it into your life, what do you have to buy. Positive changes in their lives. Transformations.

Advice for newbie: When we say triathlon, people think Ironman. Don’t tell people that’s not what you did. Not many opportunities for civilians to be a bad ass.

Secret: “It’s really not as hard as you think it is.”

Quote: “At the end of the day, it’s about being cool and looking cool.”

Thanks for sharing, Rich!