In a prelude to the Tour de Rock, our little offseason team cycling Computrainer event, we rode an FTP test and had a weigh in. There was a 30 minute warm up ride and then an Functional Threshold Power Test. 2% constant grade. You go as hard as you can for 20 minutes. There were seven us on the FTP test last night. Deanna, Luis, Bob, Jonathan, Bill, Bryan and me. My average power was 215W and my FTP is 204W. My weight was 163lbs, which calculates to an average 2.91 W/kg. Bill and Lynda’s Pain Cave is fully loaded: 8 Computrainer stations, 60″ TV, 42″ TV, surround sound, satellite radio, goos, chomps, towels, fidge full of water and gatorade, fans, and most importantly Competition! Tour de Rock details are posted below. 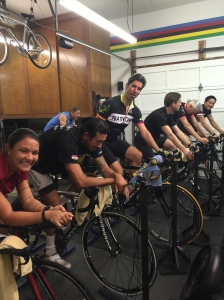 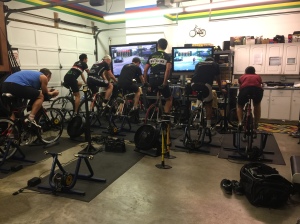 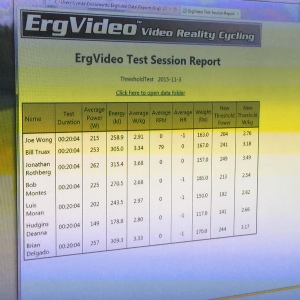 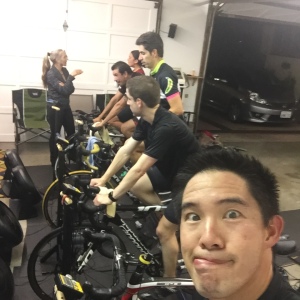 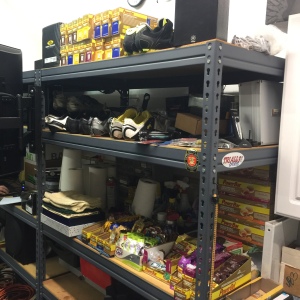 This is the official announcement of the 2015 Tour de Rock.  It’s big, it’s back, and it’s badder than ever!  I sent out a pre-announcement a few weeks ago to give you the general idea of how things were planned to work, and here’s the final data:

Participation will be open to members of PTC or TeamVolt, or associated parties. In addition to weekly stage prizes, there will be a cash awards for the winning team(s) and riders.  The competitions which will be staged are:

The prize pool is tentatively established as follows:

The number of nights we race will depend on the number of participants.  We may have two or more levels of teams.  If there are multiple team levels, the sprint and KOM prizes will be split so that each team level has a viable KOM and sprint contest.

We plan to have at least two team captains this year, who will independently choose their teams, set strategies, handle internal politics, etc.  The captains can be riders (road captains) or non-riders who “sit in the team car” and direct strategy from there.  The captains will represent their team(s) in all meetings, will receive the winner’s honors, and will have final say over the disposition of team winnings, etc.. The captains will, in my opinion, have the most interesting role of all to play.  They get to pick the teams (thereby determining the overall makeup of the series), determine strategy and tactics, push their riders and generally run the show.  We need people to volunteer as captains, so If you would like to be a team captain, please indicate your interest on the qualifications sign-up sheet (explained below).

There will be a “qualifications” process that any desired participant must complete in order to be eligible for the Tour.  This will consist of a standard Computrainer FTP test which must be completed between November 2nd and November 11th, 2015.  Qualification sessions will be at the “Home of the Rock” (perhaps also known to you as the “House of Pain”) most nights during this period at either 6pm or 6:30pm.  A Google Doc signup sheet is provided, and a link to the spreadsheet is displayed below. There are a maximum of eight slots open each night, and qualification slots are allocated on a first-come, first-served basis.  Once qualifications are complete, a Google Doc will be provided showing the names of all applicants, their FTP per test, weight, watts per kilo, availability, etc.  Riders will be seeded based on test results, and higher seeds will have greater input on team makeup, series schedules, etc., and will also have first claim to scarce resources like trainer positions, nights off, etc. Otherwise, the purpose of the seeding is to keep the level of competition high and to encourage broad participation by having people compete against their peers.

We will have our organizational meeting at 6pm on November 16th.  The primary purpose of this meeting will be the “draft” whereby teams are chosen.  This meeting will be at the Home of the Rock and will be attended in person by team captains, officials and organizers.  Participants can attend by conference call and the meeting will use Google Docs so that all participants can see what’s going on with team selection and scheduling.   Also during this meeting, team names will be chosen, schedules will be set, and all other organizational details will be sorted out.  If you wish to participate in the Tour, plan to be available for this meeting.  A conference call number will be published before the meeting.

The general idea is that the Home of the Rock will be available each Tuesday, Wednesday and Thursday night during the season for racing.  The racing schedule will start November 17th.  Races will occur for as many nights as are needed to handle all willing participants. The team captains will select an “A” squad, a “B” squad and so on for their team, and each squad will consist of four riders (who are hopefully roughly comparable).  Each team may consist of one, two or more squads, depending on the number of participants. The “A” squads of different teams will race at the same day and time each week, the “B” squads will race on a different day and time, etc.  Each squad will generally race on the same night and same time each week, and will race against the same opposing squad and team at that time.  For example, the “A” squad for Team “X” always races on Wednesday at 6pm, and the opposition is always the “A” squad from Team “Y”.

Participants will be required to commit to the entire series before the start.  Each participant will be a member of a team, and your team will need to be able to count on you.  Teams will be made up of 4 regulars, and 1 or 2 alternates to fill in when one of the regulars is sick, on holiday, out of town, etc.  The race schedule for each series will be one night weekly for 11 consecutive weeks, although we will take Christmas week off.  New for this year, we will have a Queen stage in January which will take place on a weekend (hopefully, a rainy weekend).  So, for that week, the usual weeknight race will take place in addition to the Queen stage on Saturday or Sunday (depending on your team and squad’s scheduling).

Weekly stages will be varied: climbing stages, flat or rolling stages; ITTs (individual time trials), TTTs (team time trials), etc.  Some stages will be longer than others.  Drafting will be allowed on all stages except the ITT stages.    The character of all 12 racing stages is available for review in the Google Doc spreadsheet.

The Home of the Rock will provide the Computrainers, fans, lights, courses, water, sports drinks, gels, towels, used tires & tubes, some tools and other supplies.  You need to bring your bike, your shoes, your own bottle(s) and any special tinctures, ointments, pills, nutrition or preparations which you may want to use.

The overall rules will be similar to earlier years:

That’s about it.  So – if you want to participate, go over to [withheld link] and sign up for a qualifications spot.  That same spreadsheet will have a tab showing the series schedule, and the nature of each week’s stage(s).  Figure out which weeknights and times you can (and cannot) be available.  This information will be collected during your qualifications run and will be part of the data available to team captains for purposes of team selection.  Of course, we reserve the right to refine or revise the rules, participation, schedules, etc. as circumstances dictate.  Our interest is to serve Man (http://www.dailymotion.com/video/x2f15dh). 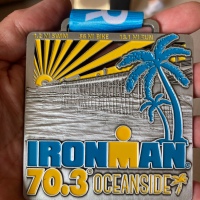 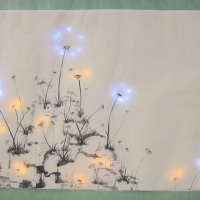 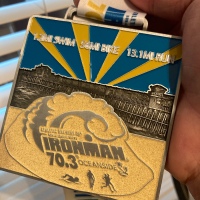 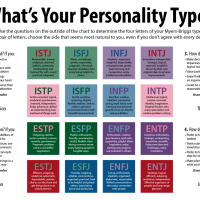