Tour de Rock finished its first week of competition. Bryan’s Team Where’s-My-Gun? is leading the Pedal Pushers, by 15:13. The course was a predominantly flat course Spring into Spring Duathlon (2  loop course, 19.63 total), to allow new CompuTrainer riders a chance to understand the setup. Several interesting factors heavily swayed the results this week. (1) New riders as mentioned above. (2) Ironman Arizona was last weekend and some riders opted out and other rode on and suffered. (3) Substitution of alternates for regular riders. All interesting factors. The Tour Host, Bill gave a tour commentary report after each night. I am posting all the commentaries for the week below. All three A, B, and C groups rode the same course, just on different nights. I ride in the B group on Bryan’s team called, “Where’s my Gun?”, aka Gunners. Our B group lost to the Pedal Pushers, but our overall Gunner team won the week. The Sprint competition also started this week. I was nervous that the ride would go out too fast and I’d get dropped right out of the gate. With GT stepping for Bill, and Kirk shuffling in for Alvin, my team was moderately and evenly paced. The other side had their full regular B ride ready to go with Scott, Allison, Trevor and Gregg; all out for blood and time to make up for from the A race (see details below). Scott was obviously sandbagging in 7th position for most of the night and then slowing and quietly swept up from behind, which kept me and Kirk on our toes. He swept up Allison and Amy. Amy out-sprinted him in the final second. Kirk and I ultimately held them off. We might not be so lucky in the future.

Next week is Thanksgiving, B Ride is on Monday. It’s a Sprint stage. Fast and crazy. 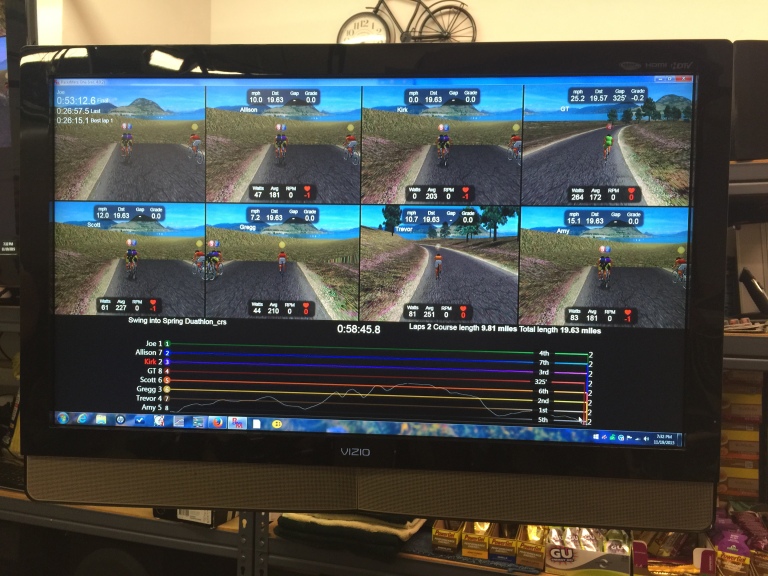 First – this report is being written from the memory of a participant, so please excuse me if I mess up a couple of details.  I was busy.

In regard to the race, it was a learning experience.  Everybody went all-out at the gun, hitting big watts.  Ben took the prize for biggest number, hitting over 860 watts, while several others were in the 600 range. After a mad scramble for about 2 minutes, the pace slowed a bit as all the riders caught their breath after the big start.  A group of six had formed, with Michael Bowdish and Jason Braun (I think) off the back of the group.

After about a minute, Bill counter-attacked the group of six, getting away on his own.  This attack was followed, after a short pause, by Jeff and Ben, with those three forming a group which built up a big lead and went unmolested to the flag, finishing in the order Ben, Jeff, then Bill.  Behind them, Jason caught and passed the remnants of the group of six and ended up in No Man’s Land for the rest of the race, finishing fourth.  Left of the group of six were Alvin,Jonathan and Mike Webb.  Mike got dropped while Alvin & Jonathan stayed together to the flag, with Jonathan outsprinting Alvin.  Michael Bowdish brought up the rear, having ridden on his own for virtually the entire race.

Everybody rode a good race, but since “Where’s My Gun?” were able to form a breakaway group at the front and TTT to the flag, they were able to put major time into the Pedal Pushers. As of last night, in regard to the team standings, the Pedal Pushers held a lead of about 1:30, but after tonight’s race, the Gunners reversed that and turned it to an advantage of about 22 minutes.

Tomorrow the “B” race goes off and we’ll see how that develops.  Until then, well done to all!

The Pedal Pushers came into the “B” race with a big deficit after their debacle in the “A” race. They had started out by picking up a minute on Night One, then lost about 24 minutes on Night Two, but came back swinging on Night Three, picking up 7 minutes and reducing their overall deficit to about 15 minutes.

The action on Night Three started out close, and stayed that way for quite some time.  After a ferocious start, all eight riders stayed together in a pack for most of the first lap, with nobody able (or willing) to break away.  The pace was fast, but everybody was determined to hang on.  Trevor was the only person to try his luck breaking away, and got away twice, only to be pulled back by the howling pack.  The second chase was animated by GT, who paid for his efforts and got popped off the back.

So, there was a 7-rider group coming into the intermediate sprint, where things finally started to break up.  The pressures of the sprint showed Trevor off the front again, but this time he was shadowed by his teammate Gregg, and they managed to form a small group off the front and worked well together.  They were followed by a group of Joe, Amy, Kirk, Scott and Allison, but that group was unable to get quite organized enough (or maybe didn’t have the legs) to pull them back.  So, Trevor and Gregg gradually built up a lead of about 60 seconds over the chase group.

Regardless, the pressure was on in the chase group, and Scott was soon off the back.  Amy later dropped off, along with Allison, so there were two small groups now following the lead group of Trevor and Gregg.  About 3/4 of the way through the race, Amy started to put attacks in on Allison, eventually dropping her.  However, it was only a few minutes later that a resurgent Scott came back strong, passing Allison and picking her up in his tow, then zooming up to Amy and forming a group of three.  However, by this time, Joe & Kirk had the bit between their teeth and were working together really well.  They were holding incredibly high speeds during the last few miles as Gregg and Trevor were fading a bit, and were able to close the gap to the leaders.

So, the first week of the Tour was eventful and successful, with all riders getting a good taste of what lies ahead.  And, what lies ahead for Stage Two is a sprint stage.  However, that stage won’t be as flat as the first, as the climbing aspects of the Tour start to rear up.  Due to the upcoming holiday, the “B” race will go off on Monday at6:30, the “C”s will go Tuesday at 6, and the “A”s will wrap up the second weekWednesday night at 6pm.

A word to all participants: the officials gave you some slack in the first week, so you could have the experience of doing a stage, working with your teammates, seeing what it takes to get here, get set up, and perform.  From now on, rules will be enforced more strictly, especially start times.  Courses will be tougher, and the competition will become sharper.  You can expect that little or no quarter will be granted.

On with the show!!