I met up with the Los Feliz Flyers again at the Cal Tech Track.

I saw a bunch of PTC folks: Lynda, Nicole, Neal, Sebastian, Trevor. Gregg, and Mike came out for the first time with LFF. Volt kids Scott, Tyler were there too. I also saw Adrian, a SoPas dad.

During the stretch time, Coach Don went over the times from the LA Rock N Roll. There were super fast guys times. 1:20’s, 1:30’s. Wow! He read off all the times for everybody. Lynda and I were the slowest times, but it was fun to hear him call out out times. He also had to go over the rules again. No spitting on the track. Haha. People. Come on. Really. He said they rent the inner 3 lanes from CalTech and LFF is the lowest man on the totem pole, so he doesn’t want to get kicked off. It sounded like there were complaints from faculty or staff. The only thing that I personally don’t get is that people run in both directions. I get a slow lane and a passing lane, but how do you keep dodging one or two people walking or jogging in the other direction. Other than that, the Cal Tech track is really nice and quiet compared to local high school tracks. Those are full of tons of moms and dads and kids crossing and running around. LFF is for serious runners. I like that. I think I’ll join them and pay the annual fees. They go mostly to the facility use. I get that.

The main group did time trials, while OTG did 800-1200-800-1200-800. I went out fast on the 1st 800. The first 1200 I started wheezing and huffing and puffing. So I walked it off and then tried to relax more on the rest of the workout. It will be a fine line to figure out how to increase speed and effort without going into an asthmatic take down. 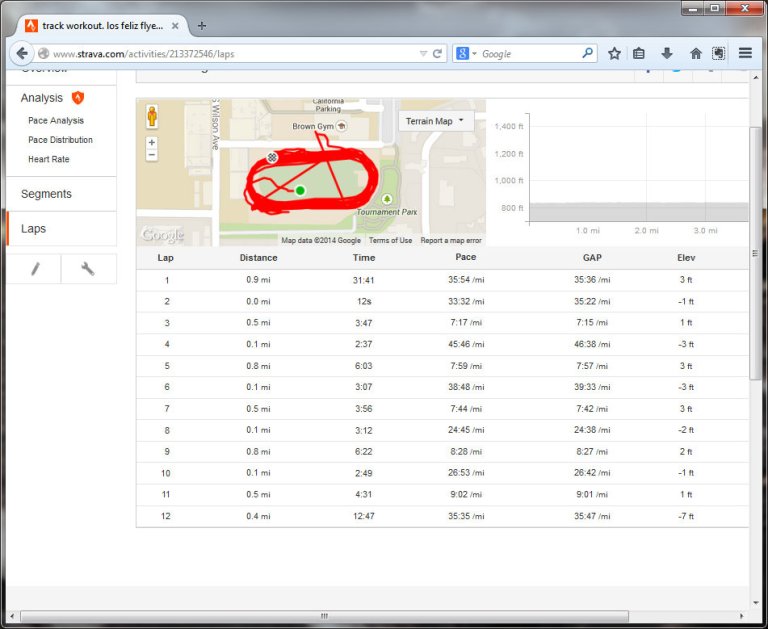